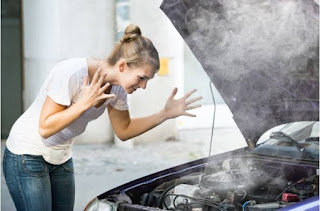 Overheating in  cars in a phenomenal that occurs when there is excessive heat from combustion  in the engine without efficient cooling.
Causes of over heating are:
1.Coolant Concentration
2. Bad Thermostat.
3.Bad Radiator.
4.Worn Out or Burst Hoses.
5.Bad Radiator Fan.
6.Loose or Broken Belts
7.Bad Water
8.leaking in the cooling system
9.bad water pump

Ways of preventing further ruins to your engine

1- Turn off the AC immediately
2- Turn on your defroster and your heat to HOT, fan on High.
3- No, seriously. We know it’s Summer and you’re going to be uncomfortable until you can get your car off the road, but we’re talking thousands of dollars in damage if your car continues to overheat! Roll down the windows too, it’s gonna be hotter inside your car than outside here in a minute. The heater will pull as much heat out of your engine that it can, which just might be enough to avoid ruining it.
4- If you’re stopped in traffic, put your car in Neutral or Park and raise the engine speed. You’re trying to get the coolant circulating as much as possible. Raise the engine speed by pressing the gas pedal just enough to get the RPM gauge to the 2-ish mark(2000 RPMs). It doesn’t have to be exact, but you don’t want to rev your engine a lot past that or you’ll risk even worse problems.
5- If you’re moving, albeit slowly, put the car into the lowest gear that will maintain between 2 and 3 on the RPM gauge as you are headed to a good spot to pull over. If you start going too fast for that gear shift into the next higher one to maintain the 2-3000 RPM range.
Doing these things should help get that temperature gauge headed back down from the “H” Mark, at least temporarily. If nothing happens to lower the temperature in about 2 minutes, SHUT THE CAR OFF right away. It’s up to you to decide if it’s safe enough to be sitting where your car stops, but we’ve seen lots and lots of ruined engines because people decided to drive “just a little farther” with an overheating vehicle.
If your vehicle is overheating, your engine is screaming for attention and your cooling system needs help. A vehicle can overheat at any point where the cooling system no longer is effectively absorbing, transporting and dissipating the heat created from your engine burning fuel.

WhatsApp is disabling voice waveforms for voice messages on Android!